YOU CAN PRESS CHARGES AND CLAIM PAYMENTS FOR DAMAGES CAUSED BY AN ASSAULT
Assault is an intentional tort (civil wrongdoing) meant to put another person in reasonable anxiety or fear of injurious contact. An offender, also known as an assailant, does not have to actually make physical contact with a victim to be guilty of assault. Assault can be the threat of impending harm, so long as the assailant is in the victim’s presence while making such threats, and it reasonable for the victim feel apprehensive and fearful of physical contact. To put it clearly, assault is against the law. So, if an assailant causes you serious harm, whether physical, mental, or emotional, they can be held liable in both criminal and civil court. Along with your right to press charges in criminal court, you may be entitled to damages in civil court. When your assault injuries have caused you to suffer, you deserve to be rightfully compensated. A skilled Indianapolis assault lawyer can help you apply your rights to claim payments through a personal injury assault claim and obtain the full and fair settlement you deserve.
CARL BRIZZI IS A FORMER PROSECUTOR AND HAS WORKED TO ENSURE JUSTICE FOR VICTIMS OF ASSAULT.
Here at LAW, our assault injury attorneys have more than 100 combined years of trial and litigation experience in severe injury cases. We know tort law, and are well-versed in civil assault cases. Our assault lawyers represent assaulted victims in Indianapolis, and all throughout Indiana, regardless of how small or large the case may be. Whether a person threatened to kill you at a bar, your ex-boyfriend put his hands on you with anger, your grandmother was beaten at her nursing home, or you were sexually abused, we can help you obtain justice by getting you the maximum settlement or verdict for your Indiana assault case. We also represent wrongful death claims for families who have lost someone due to an egregious assault.

You don’t have to hesitate moving forward with an injury claim because of your current financial situation. Not only does our Indianapolis personal injury law firm provide free initial consultations, but we also work on contingency. So, if we do not recover compensation for you, you do not owe us any fees. There are never any up-front costs, retainers, or payment obligations to hire our assault attorneys. Some attorneys are okay with a first offer or small check, but Carl Brizzi LAW won’t back down to insurance adjusters until we get the biggest check possible for our clients. So even when it comes time to pay us for our services, your wallet will be sufficiently full to do so. Contact us today to schedule your consultation, which can be done over the phone, online, or in person at our Indianapolis personal injury office.

BEING A VICTIM OF ASSAULT IS BEING A VICTIM OF A SERIOUS CRIME. CALL CARL BRIZZI LAW AT 317-636-7497 TO LEARN WHY YOU DESERVE TO BE FINANCIALLY COMPENSATED FOR YOUR INJURIES AND LOSSES, INCLUDING MEDICAL BILLS, LOST WAGES, AND SUFFERING.

Your assault attack was unfair, and you deserve justice in the form of financial compensation. Most personal injury cases are accidental, but assault is an intentional wrongdoing, which means injured victims tend to recover substantial damages, and therefore, higher dollar case results. One reason why injury assault cases typically come with higher verdicts is because it is common for victims to also be awarded punitive damages, which are meant to punish the offender and set an example to deter others from committing the same act. We provide Indiana assault victims with aggressive legal representation to secure all general damages for past, current, and future losses, including hospital bills, lost work wages, medical expenses, prolonged therapy, and more. If your assailant acted with any degree of malice or hate, we’ll use every resource in our power to also go after punitive damages, if allowable, which can compensate you for non-economic losses like mental anguish, pain and suffering, PTSD, and all other mental and emotional suffering. Call 317-636-7497 to set up a free consultation to learn the details of your claim, and be one step closer to closure, both financially and emotionally.
PRACTICAL JOKES AND SELF-DEFENSE DO NOT REVOKE YOUR RIGHTS TO PURSUE A CIVIL SUIT
If you are a recent victim of assault, but fear that your actions of self-defense negate your rights to pursue civil action against the offending assailant, you will be happy to learn that this should not be an issue. Self-defense laws are complex in Indiana, but there is no questioning whether or not a person has the right to defend themselves during an assault attack. In another scenario, if a person played a practical joke on you with the intention of scaring you, and the outcome caused you harm, that person can be held liable in an assault injury claim. For instance, if a friend pushes you off of a bridge into the river below, but the fall was too high, therefore causing you serious harm, whether emotional or physical, your friend can be legally responsible for all of your injuries and resulting losses, including medical bills, pain, and suffering.
meet the attorneys 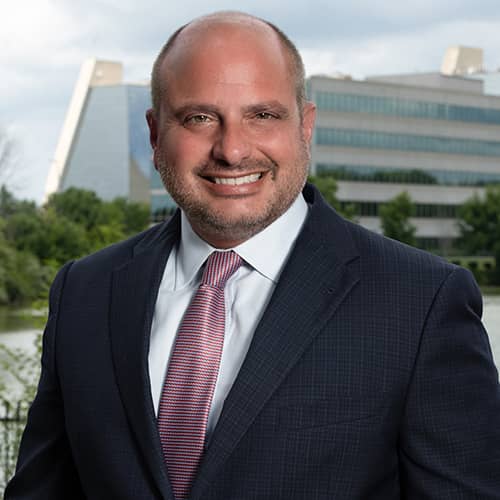 Carl Brizzi
UNDERSTANDING THE DIFFERENCE BETWEEN CRIMINAL AND CIVIL ASSAULT
The act of assault is a crime. Here in Indiana, assault is penalized between a Class B Misdemeanor and Level 2 Felony, depending on the severity of the crime. This means that an assailant, if guilty, can be sentenced up to 30 years in prison and $10,000 in fines if handed down the maximum penalties. Keep in mind that assault and battery are two separate acts. While assault refers to the threat of violence, battery is “rude, angry, or insolent” physical contact. Although both are crimes, they are also intentional torts. This means that if an assailant causes their victim injuries, the victim can bring about a civil lawsuit against them to collect compensation for their damages and losses from the assailant’s insurance company. Talk to the experienced Indianapolis assault injury lawyers at LAW for counsel of your rights to pursue legal action against someone that has threatened or harmed you with violence. Call 317-636-7497 to schedule a free consultation, today.
CONTACT CARL BRIZZI LAW AT 317-636-7497317-636-7497 AND SCHEDULE A FREE INITIAL CONSULTATION TO HAVE YOUR INDIANA ASSAULT CASE EVALUATED. DON’T WORRY ABOUT LEAVING YOUR HOME. WE CAN HOLD ALL MEETINGS VIA PHONE OR ONLINE VIDEO CONFERENCE.
meet the attorneys

Carl Brizzi, has been one of the Best attorneys I’ve had the pleasure of dealing with. He always returned my phone calls in a timely manner, He was considerate, professional, and fought till the end for a great settlement. I highly recommend Carl Brizzi as an Attorney!

Carl Brizzi is a lawyer affiliated with the law firm Lewis And Wilkins LLP. This website is an advertisement. The information on this website is for general information purposes only. Nothing on this site should be construed as legal advice for any individual case or situation. This information is not intended to create, and receipt or viewing does not constitute, an attorney-client relationship. The law firm’s past results do not guarantee future outcomes.